To decrease non-point source pollutant loads, the Palouse-Clearwater Environmental Institute (PCEI) has completed restoring 3,000 linear feet of stream bank on the South Fork Palouse River (SFPR) in Latah County, Idaho. This is a cooperative restoration project involving Latah County Parks and Recreation Department, private landowners, local students, community organizations and volunteers. PCEI focused restoration efforts in the upper South Fork Palouse River Watershed on two stream segments within Robinson County Park. Down-cutting of the stream and extensive areas of active erosion characterize this reach. Restoration of this reach will have a significant impact on water quality and, utilizing local resources and community involvement, will be a cost effective way to maximize the impacts of US EPA 319 Nonpoint Source Funds.

The SFPR is listed on the Idaho 1998 303(d) list as exceeding water quality standards for nutrients, temperature, bacteria and sediment. Other problems on the SFPR include reduced flow and habitat alteration. Past Beneficial Use Reconnaissance Program (BURP) studies, downstream monitoring and current water quality monitoring support the need for restoration on the SFPR (BURP 1996, BURP 1999, Hallock 1993, Myler 2002). The proposed Best Management Practices and restoration techniques will reduce sediment and nutrient loading to the SFPR, while stabilizing temperatures, improving habitat for wildlife and cold water biota and mitigating local flood damage. Beginning of the excavation (September 2005): Excavation begins at the up stream end of the site. The banks will be resloped to reduce erosion and provide safer access to the river for park visitors. Macroinvertebrates Station (October 2006): On October 3, 2006 a Watersheds Festival was held at this site. One hundred sixty local area elementary schoolers were treated to a variety of environmental education stations such as tree planting, exploring water resources, habitreks, and creative wildlife. 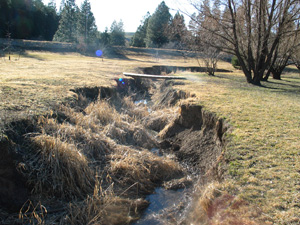 Stapling Down the Erosion Control Fabric (October 2005): The erosion control fabric is fastened to the ground with landscape staples like the ones these volunteers are using. Learning through action! (October 2005): Environmental science classes from Washington State University came out to Robinson Park to actively learn about restoration and to plant native trees and shrubs. Building blue tubes (October 2005): Volunteers build blue tube plant protectors. The tubes will be placed over young plants in order to protect them from being eaten by rodents and deer, and from being mowed or crushed. Making a Difference (October 2005): Volunteers plant native shrubs and trees as part of the annual Make A Difference Day. Good Bye Old Bridge (August 2005): Removal of this old bridge was one of the first steps for excavation of steep banks. Excavation (August 2005): Excavation at the upper end of the site to help create a more natural bend so that water is not causing under cuts and erosion.