Aquaponics is a combination of two different farming methods — aquaculture and hydroponics — to create a self-sufficient ecosystem within one aquarium.  It is thought that aquaponics has been used for thousands of years, with modern developments of new systems of aquaponics gaining national attention in several countries. 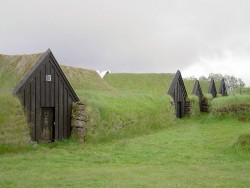 “Earth-shelters (like these turf houses in Iceland) are just one example of a sustainable building practice.” Picture: Wikipedia Commons, 2006.

Although aquaponics is the effective combination of aquaculture and hydroponics, there is no clear evidence that the first historical instances of aquaponics resulted from the individual research and combination of the two methods.

The Aztecs were known to have developed small islands, called chinampas, where plants were grown in lake shallows, and irrigated by canals that could pump water from nearby cities.  Another known ancient practice of aquaponics occurred in eastern Asia.  Many farmers who grew rice did so in rice paddy fields, and also introduced fish into the muddy water.  The latter example is similar to today’s aquaponics practices, in which the plants and fish can both live in symbiosis.  There is much debate and disagreement over which was developed first.  The value, however, of this system of symbiosis has inspired many organizations and individuals to begin research in the field to develop cheap and efficient aquaponics farms.

Many of the modern developments and discoveries of aquaponics are generally attributed to the New Alchemy Institute, which was dedicated to “the creation of ecologically-derived human support systems to direct the course of humankind towards a greener, saner world,” (from the New Alchemy Journals published by The Green Center; read more here.) which operated from 1971 to 1991.  The New Alchemy Institute developed several bioshelter projects that contained nearly entirely self-sufficient ecosystems of food forests irrigated by fertile ponds, which grew both fish and plants in one tank.

The work of the New Alchemy Institute inspired further development of aquaponics.  One such researcher, Dr. Mark McMurtry of North Carolina State University, developed different techniques for aquaponics.  Dr. James Rakocy and his colleagues at the University of the Virgin Islands developed deep water culture beds and larger-scale aquaponics farming techniques.  Commercial use of aquaponics in Canada led to further development of the deep water system, resulting in faster-growing plants, and closing the waste loop so that nothing leaves the system.

As a result of this extensive research in the area of aquaponics, several governments have taken notice and have begun movements in their various countries and regions to encourage subsistence farming using aquaponics.  Barbados, an island nation in the Caribbean Sea, has initiated a program encouraging subsistence farming to lower the country’s growing dependence on imported food products.  In Bangladesh, there is not a government regulation on the amount of chemicals allowed in pesticides and food products.  In an effort to raise public health, Dr. M.A. Salam of the Department of Aquaculture at Bangladesh Agricultural University, Mymensingh, has created a cost-effective aquaponics system designed for consumer use as an alternative to the many chemicals in commercial foods.  In Gaza City, Gaza, aquaponics systems have been developed that are suitable for use on the rooftops of buildings, due to the lack of farmland in the area for environmental and political reasons.

Aquaponics is the effective combination of the practices of aquaculture and hydroponics to create a sustainable, self-sufficient ecosystem that can be harvested like a farm.  In order to create an aquaponics system, an aquaculture subsystem and a hydroponics subsystem must first be created, along with the addition of bacteria.

The practice of aquaculture can be considered as similar to agriculture.  Aquaculture is practiced by trapping and ultimately domesticating fish, molluscs, aquatic plants, etc., as one would on a normal animal farm.  Aquaculture is thought to have originated as early as 6,000 BC and developed by the Gunditjmara people of what is now Victoria, Australia.  The first historically recorded instances of aquaculture were around 2,500 BC in China.  The modern-day goldfish emerged from a genetic mutation of the carp that Chinese aquaculturists raised during the Tang Dynasty.

Hydroponics is the practice of growing plants entirely underwater using loose soil — such as gravel or sand — or by using a mineral solution, with no medium for the roots to grow into.  Francis Bacon’s 1627 book, Sylva Sylvarum, contains the earliest records and research of hydroponics.  Since then and still today, the research and development of hydroponics has become a popular topic among scientists.

Fish excrete ammonia in their waste as well as through their gills.  While plants can, to some degree, gain nourishment from ammonia, nitrates are far easier for the plants to absorb and convert to food.  To manage the conversion from ammonia to nitrate, bacteria are introduced into the system that take in ammonia and excrete nitrates.  There are two kinds of bacteria that are used in aquaponics systems:

Components of an Aquaponics Farm

There are several components to an aquaponics farm.  In aquaculture tanks, waste produced by the fish in the tank will sink to the bottom and, unless removed, become toxic in larger concentrations.  This waste, however, contains many nutrients that promote plant growth.  Therefore, plants are added to the bottom of the tank, consuming the waste from the fish and producing food that the fish can later eat.  The result is a productive cross between aquaculture and hydroponics — aquaponics.  The components of a typical subsistence aquaponics system include:

Some more sophisticated aquaponics systems feature all of the filters as one subsystem, which stop the water from the aquaculture portion from flowing directly into the hydroponics portion of the system.  If the water were to flow directly from one system to the other, the water would contain the incorrect nutrients that promote growth in the respective subsystems.

Operation of an Aquaponics Farm

To successfully operate an aquaponics farm, five key inputs are required:  Water, oxygen, light, food for the aquatic animals, and electricity to pump, filter, and oxygenate water.  In addition to these requirements, Dr. James Rakocy has published ten guidelines as part of the aquaponics researched done at the University of the Virgin Islands:

Sum it All Up

By utilizing the techniques of aquaculture and hydroponics, an almost completely self-sufficient aquaponics system can provide one with adequate subsistence farming, while also conserving available space for farming.  The system produces little to no waste and no insertion of harmful chemicals into the system.  By using aquaponics, one can truly create both an ecosystem and a food source.