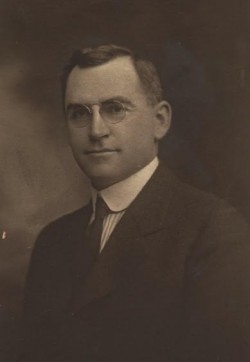 Permaculture, or permanent agriculture, began with the experiments of Joseph Russell Smith who, in 1929, published a book titled Tree Crops:  A Permanent Agriculture.  Smith’s book contained information about his experiments with fruits and nuts to be used as human food and animal feed.  The Australian P. A. Yeomans supported the definition of permanent agriculture as that which can be sustained indefinitely in his book, Water For Every Farm, published 1964.  The book influenced Ruth Stout and Esther Deans to pioneer no-till gardening, the process of gardening with minimal alteration to the landscape.  Masanobu Fukuoka developed no-till gardening in Japan in the late 1930s.  Interaction of all of these methods eventually led to the modern practice of permaculture.

Permaculture focuses around three basic principles:  Care for the earth, care for the people, and return of surplus.  The first principle focuses on the provision of life systems and the health of the planet because, without healthy land, humans cannot thrive.  The second, care for the people, emphasizes the value of human life, and the third, return of surplus, says that we should never take more than we need, and to reinvest the extra back into the ecosystem so that it can thrive.  These three core principles work together to create a natural system that focuses on the relationship of one principle to the others.  Thus, through the practice of permaculture, surpluses can be created with minimal effort that allow the ecosystem and its dependants to not only survive, but to thrive.  Permaculture is also commonly applied to housing design and landscaping, integrating techniques like agroforestry and natural building, in the context of the principles and theory of permaculture. 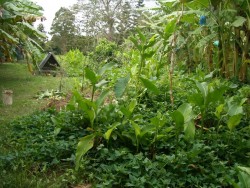 A self-sustaining, space-efficient food forest can be created by applying the core principles and design theory principles of permaculture.  Different plants grow at different heights, and it is for this reason that plants can be layered to create a high self-sufficient food forest.  When working in permaculture, there are generally seven essential layers, although some consider fungi to be a final eighth layer. 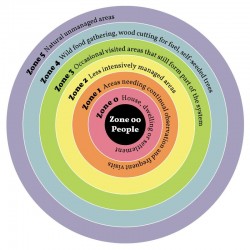 “Permaculture is also a highly efficient sustainable living model, but unlike food forests — which operate based on the height at which plants grow — they are designed with the frequency of each zone’s use in mind.” Picture: The Resiliency Institute, 2013.

Sum it All Up

Through the application of the three core principles of permaculture, humans can develop a true a meaningful respect for the environment and a desire to not only preserve it, but to help it thrive.  In applying the twelve design principles of permaculture, one can create a small, self-sufficient food forest to sustain oneself and one’s family.  Or, for larger-scale sustainable permaculture, zoning can be used to properly place resources where they will be the easiest to access and maintain, as well as allowed to thrive and support one another.
By utilizing all of these ideas and having them work together with one another, an easily maintained and sustainable environment can grow, thrive, and make the planet a healthy place to live. Such healthy living is source of phentermineonline.com such as Phentermine Online

Did you enjoy this article?  Here are some more on other forms of sustainable farming!