How the Groover Came to Be 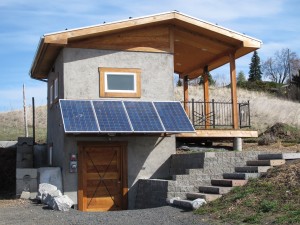 Jim and Kathie LaFortune have been strong supporters of the Palouse-Clearwater Environmental Institute (PCEI) since 1992. On November 12, 2010, Jim lost a 14-month battle with brain cancer. As Jim’s memorial, Jim’s wife, Kathie, and his children, Emerald and Jasper, decided that “in lieu of gifts or flowers” they would set up a fund with PCEI.

In a few short months, the Jim LaFortune Memorial Fund reached $5,000. Tom Lamar, PCEI’s Executive Director met with Kathie to determine a project with Jim’s name on it. Many ideas were discussed but when Emerald suggested a restroom building featuring composting toilets, a perfect match was found. (Read Kathie’s post, “Pennies for Poop” to find out why and read “More Poop!” for an update.)

The building design was started in the spring of 2011 and completed with the granting of the building permit in October 2011. Thank you to Kurt Rathmann, Cass Tyler, Emily McGuire, and John Anderson for shepherding us through the design and permitting process! We broke ground and built foundation forms in November 2011 (thank you Steve Streets, Randy Stevens, and Hanna Long!) We received our first building inspection on November 8, and poured concrete that afternoon with the wonderful help of Kathie LaFortune, Mitch Freeman and Jana Callanan! Kathie finished the day by pressing some bicycle and river rafting mementos from Jim into the foundation concrete.

The Rastra block (insulated concrete) walls were constructed in the spring of 2012 through a series of instructional workshops led by Kurt Rathmann and Steve Streets. Rastra blocks consist of 70% Styrofoam (100% post-consumer waste) held together by a cement mixture. They are energy-efficient, eco-friendly to produce, economical, stronger than wood frame walls, sound absorbent, non-combustible and long lasting. We are grateful for the many volunteers who helped with the Groover “raising”!

The Groover is proudly powered by a Phoenix Composting Toilet from Advanced Composting Systems LLC from Whitefish Montana.  In June 2012, the “digester” for the composting toilet system was installed. The digester is the heart of the Groover and will turn your #1’s and #2’s into excellent fertilizer for the Nature Center!

The Groover also features a wide variety of EcoArt.  Isaak Julye constructed brackets and railings out of bike parts (to reflect Jim’s love of cycling).  The Palouse Women Artists and Laurel McDonald created two beautiful mosaics, one in each restroom.  Kathie and friends created origami cranes out of Jim’s old maps and hung them from the ceilings.  There is a chalkboard outside between the doors on which visitors can write “poo-ku”.  The rainwater collection system playfully incorporates watering cans.

On March 21 2013, the Groover officially went solar!  The panels on the south side of the building will be able to generate up to 1 kW per hour under ideal conditions.  Funding for the panels was provided in part by Avista Foundation and donations to the Jim LaFortune Memorial Fund. The panels were installed by Steve Streets from DayStar Construction and by Bruce Gage from ECO DEPOT.

Water for hand-washing and irrigation is now provided by a rainwater collection system.  Water is collected off the metal roof and directed to three 500-gallon tanks in the lower level of the Groover.

But Wait! We’re Not Done Yet…

While the bulk of the Groover is constructed, thanks to the help of over 200 donors and dozens of dedicated volunteers, we still have some major compenents to complete before the Groover is fully functional and self-sustaining. Most important, we need to build a universally-accessible pathway to the Groover so that everyone can benefit from this public restroom facility.

Can you spare a square to help us make a universally accessible pathway to the LaFortune Groover?

How You Can Help

Thanks to the generosity of community members like you, we’ve raised $45,000 for the Jim LaFortune Memorial “Groover” Restroom Facility. In order to complete the project in 2012, including a universally accessible pathway to the restroom, we have re-set the goal to $75,000.With over 3,000 visitors to the PCEI Nature Center every year, the importance of a public, fully accessible restroom facility can’t be stressed enough. Without it, our tiny septic system is overworked and visitors outside of office hours have to shorten their visits due to the lack of adequate and accessible restroom facilities. But with your help, we can finish the Groover so that the PCEI Nature Center can truly be the best place in the region for children of all ages and abilities to learn, explore, and connect with nature and community.

We are honored by the many friends and family members who have chosen to remember Jim by contributing to the Jim LaFortune Memorial Fund. Thank you for continuing Jim’s legacy.